We’ll be raising money for: 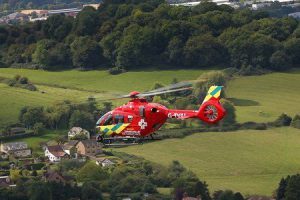 Thames Valley Air Ambulance provides emergency medical care for around two million people that live, work and travel in Berkshire, Oxfordshire and Buckinghamshire. Each day an average of three people in the Thames Valley region will  find themselves in a life-threatening situation which requires urgent, high-quality medical treatment.

Based at RAF Benson in Oxfordshire the Charity was founded in 2000 and now operates 365 days of the year. In 2015 it launched a  new helicopter which now allows night operations in cooperation with Hampshire and Isle of Wight Air Ambulance. The two services now cover 19 hours per day throughout the entire year. TVAA also operates the Helicopter Emergency Medical Service car which has become a vital part of the service. It is staffed by a critical care paramedic and a senior doctor and is equipped with the latest medical devices. The car can be deployed day and night and at the same time as the helicopter to reach more people in critical need.

TVAA’s service provides a high level of diagnostics and treatment on-scene. In critical situations speed and accuracy are vital, and the helicopter can air-lift patients if necessary to the nearest major hospital, saving time and saving lives.

The service costs £2.2 million per year all of which is publicly funded. TVAA receives no Government funding and are not supported by the National Lottery. Instead it relies on the generous support of the public to keep delivering its unique life-saving service to patients where and when it is needed most.

All Bluebell Walk entrance money and all dedicated donations plus 80% of unspecified donations will go to the Air Ambulance.

East Garston is a picturesque village in the Lambourn Valley

and is home to a lively and active community. The village hosts various events throughout the year, including this Bluebell Walk. Some of these gatherings are to raise money for outside charities and some just for the fun of it.

The tea stall will be organised by the stalwarts of All Saints Church at East Garston. This church dates from 1190 and is in constant need of maintenance and repair. All proceeds from the teas will go to church funds.